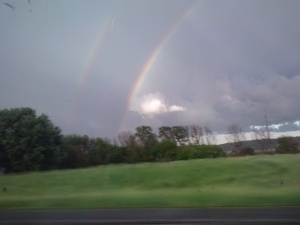 Is it a promise of a better tomorrow or pot of gold at the end of the rainbow? There’s two of them, so maybe it’s both!

My husband and I were driving home from Omaha a few weeks ago. It had been storming and the weather had been quite scary. Ever since the experience with the lightning strike, I get really nervous when it clouds up. On this particular day, we were driving on Interstate 680 and would soon be crossing the Missouri River and heading home into Iowa and traveling north on Interstate 29. We had another 30 miles to drive to get home.

It was raining, the wind was blowing, the tornado sirens in Omaha were sounding,  and then in the middle of all that, the sun suddenly came out. As soon as I realized why it had gotten so bright, I looked around for the the rainbow. I was surprised how close they seemed and how bright the colors, it was beautiful and I know this is silly, but it filled me with hope.

I brought out my new cell phone (the one I couldn’t remember how to use when I needed to call 911 after the lightning strike). I know how to use it now, well the camera anyway and I took the picture above through the car’s window. It turned out pretty good for an amateur, don’t you think?

A few minutes later and we were now on The Mormon Trail Bridge crossing the Missouri River driving East into Iowa when these rainbows appeared. 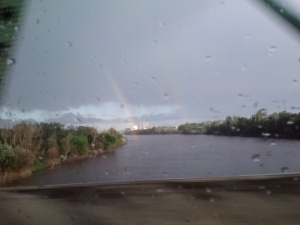 Rainbows in the southern sky over the Missouri River on May 30th, 2013.

I took pictures of rainbows almost all the way home, but these two were by far the best. Each time I saw a rainbow that night, it reaffirmed my belief that rainbows are a promise that dreams come true. What isn’t promised is that it will happen tomorrow, or next week or even next year or even in our lifetime. Does that mean we’ve failed?

Many painters, authors, musicians and sculptors from the past are remembered today for their art, but many of them also died paupers and were never even recognized for their talents until after their deaths. Does that mean they failed?

Of course not, it means that they worked diligently to achieve a dream and in the end, they did! Nothing in this life is a guarantee except life and death and (according to my husband the cynic) paying taxes.

So what about us? Have we failed or are we working diligently to achieve a dream? What is your dream?

I think those artists of old had it easy compared to today’s crazy busy world. They didn’t have to promote their work. All they had to do was create it.

A mysterious “voice” warns Emily that she is in danger. She believes she’s losing her mind!

Nightmares, my debut young adult, paranormal/mystery novel can be found on my publisher’s website, MuseItUp Publishing, Amazon and Barnes and Nobel.

Check out my short story “Trapped”. It can be found in the anthology Mystery Times Nine 2012 also on Amazon and published by Buddhapuss Ink Publishing.

Join me on LinkedIn

Posted in About My Books, Essay, Family, Uncategorized

Woman on Her Way

Welcome to my world! It's full of angels, vampires, shape shifters and occasionally other paranormal creatures. I hope you enjoy their company as much as I do!