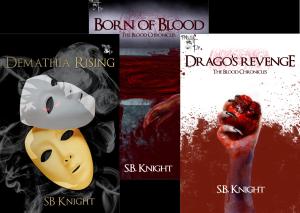 The Trilogy is now available!

I finished reading “Born of Blood” by Sb Knight last week. It’s the first book in The Blood Chronicles Trilogy. It’s called a dark fantasy and horror fiction. If this is your genre then you’ll love this book. Mr. Knight delivers it well.

The book is not intended for anyone under the age of 18. This book my not be for you if you are squeamish and brutal acts of blood lust and rape upset you. Reader beware: The title of the book, “Born of Blood” is the perfect description of the contents.

But as mentioned above if this is your genre, you won’t be disappointed. I’m not really into a lot of blood and gore. I like scary and tremble in the dark kind of books. “Born of Blood” delivers the best of both the blood and gore and the tremble in the dark scary. So much so, it actually gave me nightmares, but I had to keep reading to the end and I plan on starting the second book of the trilogy, “Drago’s Revenge” soon. (I had to take a break from all the blood and violence, so I’m reading a romance right now.)

“Born of Blood” begins with Jesse (Jocelyn). She’s young and single, but wants a relationship with a good man. She meets Drake through a dating service and really likes him, but she soon discovers he’s not what he seems.

Her next-door neighbor, Sam is a shy, inexperienced young man, who is too afraid of rejection to approach his beautiful neighbor. He watches her (not in a creepy way) and comes to her aid whenever she needs any help and lives in hope that she may someday notice him.

When a friend of Sam’s goes missing and some of the circumstances point toward Jesse’s new friend, Sam begins to research Drake and his family. What he finds is terrifying and the results puts Sam on a violent road of trying to stay alive long enough to somehow save Jesse from a vicious vampire.

My favorite characters, other than Jesse and Sam are Reba and Charles. Charles is an immortal and Drake brings red headed Reba home as a “pet” for Charles. Reba is an outspoken barmaid with empathy and guts and somehow she cracks Charles’ stone cold demeanor.

The one thing that troubled me about this book was how some of the characters reacted to bad situations. Instead of getting the “heck” out of there, they would dawdle around. I’m sure it was to build tension, sort of like the movie’s where the audience is screaming: “Don’t open that door” or “Run you idiot, run!) but it just didn’t seem realistic to me because if I had been in the same situation, I would have been running. A minor quibble I know and it’s probably just me.

Over all I would give “Born of Blood” by Sb Knight four bloody  stars ****.

Here’s a link to Mr. Knight’s website where you can find the book and much more.

What do you think? Does Sb Knight’s book appeal to you? Do you know anyone who enjoys dark fantasy and horror? Sb was kind enough to offer a PDF file of the first three chapters of each of his books. If anyone is interested or just curious, please leave a message stating that fact and how I may contact you to deliver the file.  No strings attached and no jumping through hoops or entering a contest to receive them. Everyone who requests copies will get one, all you have to do is let me know how to get it to you.

Don’t forget! My book NIGHTMARES is now available and also my short story TRAPPED is included in the anthology MYSTERY TIMES NINE 2012

Also NIGHTMARES is available for the Nook at Barnes and Nobel

A mysterious “voice” warns Emily that she is in danger and must remember her past. She believes she’s losing her mind!

Woman on Her Way

Welcome to my world! It's full of angels, vampires, shape shifters and occasionally other paranormal creatures. I hope you enjoy their company as much as I do!